« Testimonials
The call came early one morning in January.  “Dad, my check engine light just came on, the dipstick shows no oil, I’m standing beside I-80 twenty miles west of Lincoln Nebraska and its 11 degrees”. 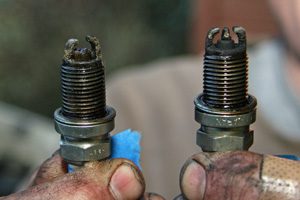 My son Peder was on his way home from Flint Michigan to Beaverton Oregon in his beloved ’96 Toyota Tacoma (“Taco”) pickup.  He’d just graduated from Kettering University with a BS in mechanical engineering and was making his final cross county sojourn as a student.  Having just checked the oil when he fueled up in Lincoln he knew this was a serious problem.

Towing the truck to the nearest Toyota dealer they hypothesized that the center electrode of one spark plug had come loose creating a hole in the piston.  That cylinder had no compression and the exhaust was an enormous blue cloud. His engine was toast — the dealer recommended a rebuilt replacement, the only practical solution they could present .  So what to do?  Newly graduated, he was not yet employed.  The truck was worth too much to scrap but not enough to justify spending north of $5K to have the dealer do the repair. 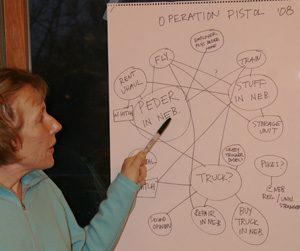 We’re both fearless amateur mechanics with the skills to fix it ourselves but his truck was 1600 miles from home.  How could we help him from way out in Oregon?    Mom Judy with sisters Tracy and Katie began brainstorming possible solutions (complete with flip charts).  After some research into vehicle transport services, rental trucks, etc. the alternatives were as cost prohibitive as having it repaired in Nebraska.  So, who do we know in Nebraska?

As the Region 1 LMM board member it was my privilege to have met many good men during my involvement with LMM.   I called Les Robbins who was spearheading the upcoming 2008 Gathering in Omaha.  He offered to loan me his car dolly but we didn’t have a vehicle stout enough to tow it.

Next I called Mr. Bill Sapp.  If you have traveled middle America you’ve probably seen a Sapp Brother’s truck stop with their trademark giant coffee pot.  I hoped Bill might be able to put me in touch with an empty 18 wheeler headed west.  In just a few hours he had hooked us up with a friend from his Bible study, George vonRentzell, owner of Servant Moving based in Greenwood Nebraska.  George said he’d bring Peder’s truck home in his moving van for little more than the cost of fuel if we could wait until he had a load going to Oregon.  He even offered to store the truck in his warehouse out of the weather! 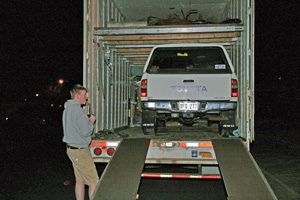 By now becoming friends with the AAA tow driver, Peder was towed from the Toyota dealer to George’s warehouse.  He flew home from Omaha and began a series of job interviews ultimately landing a great job not too far from Portland.  Late one Sunday night in February a moving van pulled up in front of our house and Peder’s truck was finally home.

After disassembling the engine enough to prove the Toyota mechanic’s original assessment he found a good used motor in Seattle.  We swapped it with an engine hoist borrowed from Dale Osten, one of my weekly Bible study friends and he was back on the road, total repair cost including transport < $2K.

h to publicly thank these guys that helped us but primarily to demonstrate the value of relationships.  I only knew these men through LMM and casually at that.  Yet they went out of their way to help me and my son when he was a stranger in a strange land.  You may not meet men from all over the U.S. by being involved with LMM — but then you maybe you will.  In any event, making friends, sharing our faith and helping one another can happen anywhere, even at your church.  Oh, spending time getting greasy with your son is a good relationship thing too. 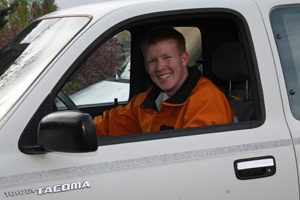 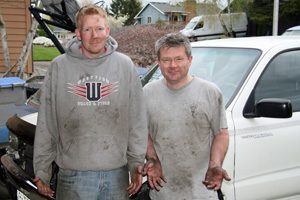